Recently, I have been tidying up files on old hard drives to move the files to cloud based storage in order to have easier access and reduce cluttering. Going back to old files brings back lots of memories and it is a good exercise in learning back about the development and activities I did in my career/life so far. Old pictures appear and old manuscripts written and never submitted also show up. Finally, old analysis files, notes, correspondence reminds you of many hours spent discussing/debating/working on various projects with many people. Working in Sport and Science gave me tremendous opportunities to meet really clever people and learn from them. One of them was my old mentor Prof. Bosco. It is amazing how many things which are now relevant in the sports science industry were introduced by him in the 90s and still stand strong. One of the many realisations of going through old files was that our first paper on whole body vibration was published 20 years ago. Yes 20! I was at the beginning of the PhD journey and this was one of the first projects conducted with the team I was coaching at the time.

The paper was published on Biology of Sport, and I had the help of some great people to make sense of the data and improve the writing to make it good enough to be accepted and published. The article is here, and I still treasure the notes/comments of Professors Josefz Tihanyi and Atko Viru both working with Prof. Bosco at the time on various collaborative efforts to understand better many aspects of strength training. 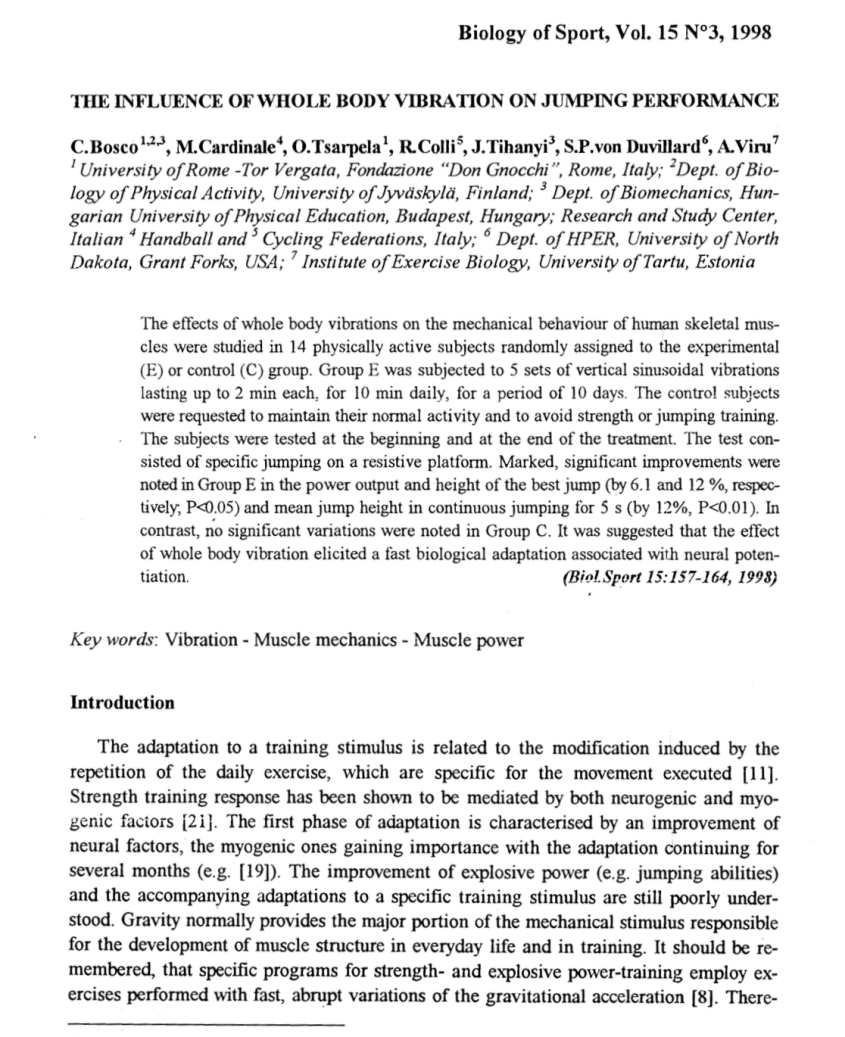 This paper was the beginning of a series of efforts to understand more about the possibility to use vibration as an exercise intervention, and it was a follow-up to the work performed by Vladimir Issurin on segmental applications in athletes. I still remember the pride of the first acceptance letter. I also remember the sudden interest this experimental modality (at the time) raised in the sporting and academic World. Since then, hundreds of papers have been published on this topic by many research groups around the World and most seem to suggest that our intuition of using such modality to improve strength in various populations was not far-fetched. Sadly, marketing has got in the way with many commercial interests which have somehow impaired the development of such modality in my view, rather than exploiting better applications and safer guidelines. Also, it is kind of gone out of fashion and replaced by “newer” modalities. I do see in fact in many places I visit (gyms, hotels, fitness centres) some vibration platforms in corners mostly unused. It is sad to notice that young practitioners don’t seem to be interested in the applications of vibration anymore, however I am still convinced that there is still plenty of scope for its use not only in Sport but also to help various populations as evidenced by my work with colleagues at the Italian Auxology Institute. Finally, there is a lot of potential for applications in rehabilitation and for the elderly.

I remember the beginnings, when speaking at conferences I met loads of skeptics (lots of heads shaking in my first few talks at conferences) and had quite a few grant applications turned down. Things got better later on in my career (but funding agencies don’t seem to like non-pharmacological interventions…). However, fact is that 20 years from that paper, there is now a scientific community studying vibration and successfully showing what works and what does not work. Many still trying to figure out the exact mechanisms. The number of papers has exponentially increased, and while I marginally contribute to that literature still as my interests have changed, I am proud to have been part of the “pioneers” which started the scientific debate and evolution which for sure is providing some patients and sports people with another avenue to improve performance and quality of life. On the other end, what I am less proud of, is the fact that an industry of gurus and pseudo experts developed as a consequence of the work done by many institutions which have “confused” the end users rather than improving the outcomes and have barely invested in the scientific developments. This is similar to many other “industries’ in the sporting/fitness World where “experts” tend to appear and disappear when commercial gains become available and/or disappear. But that’s a topic for another post…as now it is time to be grateful for the journey which started with that paper 20 years ago under the mentorship of some of the greatest sports scientists in history.