Skip to content
I realised I have not written much on the blog for ages now and this is a good time to analyse the year just finished as well as looking a bit into 2017.
First of all, thanks to the 13,134 users who read the blog. It feels like a small town was curious about my writing and I want to thank everyone for the more than 72,000 page views.
Despite the fact that I am not terribly active on the Blog, “old” articles still seem to be of interest and hopefully in 2017 I will be able to write more.
This has been an incredibly positive year (oh well, a part from my knee injury). At work many things happened which were incredibly rewarding.
In February 2016, we held the first scientific conference dedicated to Training Load monitoring in Aspire. The conference was a big success also echoed by the #trainingload2016 and the twitter trending. All the talks are now available for free online and in the first few months of 2017 a special issue of the International Journal of Sports Physiology and Performance will be made available online (again for free) with all the papers and reviews from the conference.
https://player.vimeo.com/video/160709539

Training activities and at Aspire were in full swing and summer camps saw few of our young athletes get medals in Regional and Continental championships as well as qualifications to World Juniors in many sports.
In July our student/athlete Mohamed Ibrahim Moaaz coached by Ivica Jakeljic became World Junior Champion throwing his discus 63.63 meters. An incredible result considering his young age and a testament to the excellent coaching and support received at Aspire Academy since he joined.
In August, we had four former students qualified in Rio de Janeiro for the 2016 Olympics and they all did very well with Mutaz Barshim coming back to Qatar with an historical silver medal. 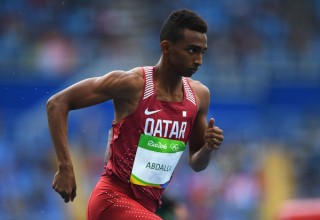 These were incredible results for a small country like Qatar and something to be really proud of. furthermore, these are very young athletes with great potential for the “home” World Championships in Doha 2019. For the first time in years I was away from the Olympic environment and I have to say I missed it, but it was great to support Qatar and also see how well my former colleagues did with Team GB and Team Italia.
The Olympics always give us incredible stories of athletes, coaches and support staff capable of doing amazing things. However, sadly, they also remind us of the dark side of sport with many doping stories, in particular the McLaren reports (1 and 2) from WADA.
In October I was invited to speak at the 50th anniversary of the Italian School of Sport at the Olympic Committee and it was great to see again so many familiar faces, but also remember former colleagues like the late Marcello Faina and my mentor Carmelo Bosco. I left Italy many years ago to pursue my career in sports science, and it is always special to be able to come back and hopefully inspire the younger generation of Italian Sports Scientists.
Thanks to work within my unit and collaborative efforts with other scientists, this has been a productive year from a scientific standpoint. First we published this work on Citrulline Malate conducted before the London 2012 games. Then this paper on Ischaemic Preconditioning, part of a series of studies conducted with colleagues in UCL before I left for Qatar. Work conducted in the lead up to London 2012 with Boxing and in the lead up to Sochi 2014 with Skeleton was also published. The first of the papers related to the Handball study conducted during a World Championship in Qatar was also published as well as the mini review from the talk I gave at the Training Load conference. In the last few weeks, we also received acceptance for a study conducted understanding practices and attitudes towards recovery in adolescent athletes in Asian and UK cohorts, and this work from Dr Pujari’s PhD in Aberdeen on a novel vibration exercise device. Few papers are still under review or just accepted but not available online yet, so overall it has been a very productive year.
2017 looks already interesting. We have athletes competing in international competitions and trying to qualify for World Youth and Junior events in various sports. Some interesting scientific efforts are continued to understand more how to support better young athletes and I am due to speak to a super interesting conference on young athletes in Montreaux in September 2017. If you want to know more about this event just go on http://yaf2017.org, it is going to be a very interesting conference and I am looking forward to learn from many international colleagues as well as give my views.
So, au revoir 2016 and welcome 2017.